Snap Maps Heat Up: The Future of Party Promotions? 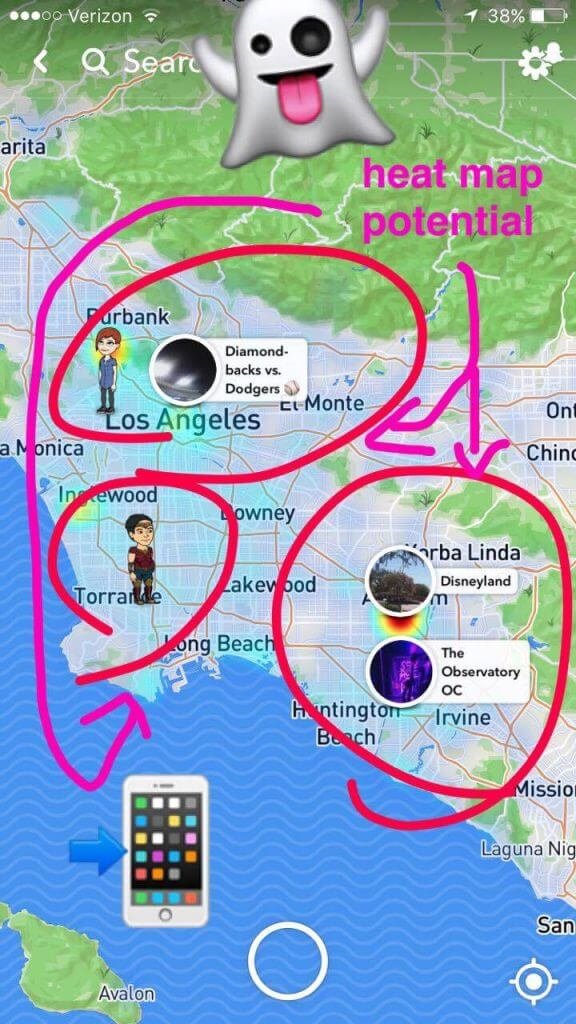 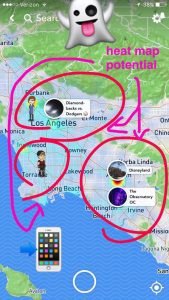 Snap has been struggling lately in the intense InstaStories/Facebook competition, yet they continue to bring new innovations that entertain us and remind us of how fun they really are. The new voice filter and backdrop features have wormed their way into the hearts of our latest-app-feature focus yet again.

Okay, that’s your intro. Here’s the real story: it was crazy hot the other day and my team and I were having a creative break from a long day with some high-profile clients that are reasonably demanding, with cause. We were trying to decide where to go for the evening to relax, have a couple drinks, and be where there was a good crowd but not too crowded. It was a Wednesday, and we live in LA, so which place in the Hills would we hopefully run into a few of our other friends? And again, we wanted people there, but not too many people.

A thought then occurred to my team member, Neal (super techie CTO for those of you who don’t know him yet). He looked at me and asked, “Could you imagine how easy its going to be to find the hottest locations to hit up thru Snap Maps with this heat map functionality?” Hm. Why, yes, yes I could. But wait a moment, what would it take for Snap to get there?

Facebook is the elephant in the room with 94% of marketer’s dollars, while Snap is still struggling to grab marketer’s interest as of last month. But hope is not lost. With heat maps, a whole new playing field is opened to geo-targeting real-time potential. But first, a few terms of engagement must be allowed. As of yet, no solid promises have been made either for or against it. Andrew Hutchinson (of SocialMediaToday.com) mentions that Snap stated “they won’t be running ads in Stories accessed thru Snap Map, and won’t be selling promoted Stories to appear on maps, though that, of course, could change in the future — and will if the option proves popular”. So, all we need is popular opinion to create a potential cash flow for entertainment venues around the world. The world. Vacationing may never be the same. If, Snap can get enough users to generate enough demand for such an option.

Here is a glimpse into the potential you could see from Snap’s heat maps: peek into events before you even call Uber…no one likes to waste their money on a ride to a dud party. All those trendy clubs that keep lines wrapped around the block, while only 15 people are meandering around bored inside…ain’t gonna fly anymore. The flip side to this is how much help events and club owners will actually need from a professional social media company. At these events, hundreds of people taking video and uploading it are amateurs who aren’t really using cool feature edits because they are busy drinking and dancing. This is where a social media company steps in. Cue their awesome video content team of two that work their way through the crowd getting dope shots while utilizing all the best Snap features, properly tagging and hashtagging, and getting the partygoers involved in the fun. Nice, right? I know.

Since that conversation on a hot Santa Monica night, we are on overdrive here at SouthHaus Group, testing out possibilities and the specific way each of the new features work to see how we can put our social media creativity to work. Party promoters, concert venues, event planners, take note: people are now appearing inside the actual live view of what’s going on…and you may need to call a company (i.e. SouthHaus Group) to up your game in a social and virtual world gaining total transparency.

One may argue, as many concerned parents of young children do, that heat maps are a predatory playground. Publicly posted images are able to be searched on a live map, where each user’s bitmoji is positioned. That being said, its not a large difference between this situation and Facebook check-ins. Choosing to post something on Our Story is just that: a choice. It is intentional, so it is very easy to avoid. People have complained that Ghost Mode is too confusing to disable easily, but as with any new technology, constant learning is an ongoing necessity. If you want to learn how to do it, click here.

It will be very interesting to see whether or not Snap becomes a bona fide financial marketing tool, and if and how party promoters and event promotions harness the brave new feature.